depression is real, you are beautiful, and stigma is stupid

this week is mental health awareness week, so i figured i would contribute something to the ole mental health community.  there is a "defeat denial" campaign put off by the CAMH and lots of other nice things.  there are probably lots of more fun interesting things i could talk about like how falafel at mohammed ali's is the most spectacular drunk food, but i'm gonna go with this for now.

stigma around my depression has not been a big part of my life for the past year.  the people around me all know about my depression and are loving and never judgmental and try to understand that sometimes they can't understand and that's okay but honestly it's really not a big deal and it's really not a big part of my life when i'm happy.  i know the stigma pretty well, but my family and friends and former teachers and conductors and current professors; these people in my life are spectacular champions of non-stigma and the most genuine love and maybe they should all get awards (i think they really should).  and i'm feeling pretty good now, and i'm pretty happy i have them.  and so i don't know all that much about stigma, but this is what i do know:

there are always little wisps of guilt and shame shrieking that depression is not okay and i am crazy and selfish, and so i meander through all of my little 'healthy cognitive structures' and try not to internalize and can bring myself to this conclusion: depression is real, you are beautiful, stigma is stupid and sometimes people are wrong.  and i know that.  there is no stigma around my life, and there is no stigma that i adopt and nurture and call my own, but it is still there.  and that is my point.  there is stigma in the air.

when stigma comes my way, i'm pretty good at dealing with it.
some people are just wrong.  stigma is stupid.  if people can't handle depression, i really honestly don't want them in my life.  if someone hears that i'm depressed and doesn't want to go out with me then my response is: well obviously you are the worst person in the world so no thank you anyways.  but anyways.
this is what is wrong with stigma: stigma is a social license to stop caring and stop listening.
the answer to any stigma is always simple: "you don't know me."

i remember the most recent explosion of stigma in my life was when someone who had been a pillar of strength and support and wonder said to me in one of my most vulnerable moments, 'but are you really actually trying to get better? sometimes i don't think you are?'
woup! there we go! good point.  my doctors must have missed that.  it's been that easy all along!  if only the psychiatrists and therapists had prescribed 'effort', maybe i could have just picked my little self up and romped along, happy and carefree.

but here is the thing: there is a problem with the question, but there's a problem with my reaction too.
the reason stigma exists is because it has to fill the air with assumptions when people don't talk about things and when people don't listen.  and so if i react in my little defensive way, the only thing i really achieve is stifling the conversation even more.  because it isn't fair to assume what people know and what people don't know either.  the response is 'you don't know me,' but sometimes that needs to stick; you just don't know.  the reason we tend to hear the same theories over and over again ('you're just not trying,' 'you're just looking for attention,' 'just snap out of it') is because people are doing everything they can to try to make sense of something, to try to deconstruct something that they just don't know.  it's because people are trying to understand, by applying a mentally healthy framework to a unhealthy mind.  honestly, they're making due with what they have and it's hard to blame people for that.  they just don't know.  and so this is what stigma is made of: what people don't know, what we expect them to know, and pride.

i'm not so sure it is fair for me to assume that people know that my sadness isn't about greed or effort or attention.  here's the catch: as long as they don't assume that they do know.  my friends ask me questions all the time.  they usually preface it with long rambling  ihopethisisn'toffensivei'mjustcuriousmaybethisisthewrongthingtosay missives, and then they ask one of the typical questions and that is okay.  because the only way to push stigma away is to fill the air with conversation and with answers, so people don't need to try to guess 'why'.  and so that is what i try to do.  i try to answer the questions as honestly as i can, in a way that makes sense to people.  not everyone can be this open about it.  i mean i'm pretty painfully frank about it when i do talk about it, which might be 1% of the time because there are more interesting things in the world, but it took me a reallllllllly long time to work my way through my own issues and talk about it, because it is really hard to tell people who do nothing but love you that you do nothing but hate yourself.

(i think this week i might post a little about the-things-that-people-don't-understand and clear the air around some of the things (if i have time which i probably will because i am sick with cold and fever and flu etc) that i hear a lot)
- September 29, 2018
Email ThisBlogThis!Share to TwitterShare to FacebookShare to Pinterest

the six things i have learned from unbearable sadness

there are things that come from sadness. one of them is knowledge. people spend a lot of time talking about the benefits of depressio... 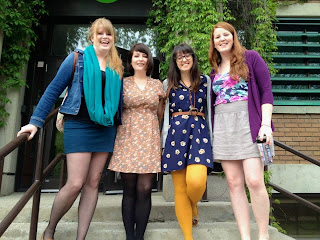